And Just Like That... The Documentary Trailer Gives A Window Into The Shaping Of The New Series 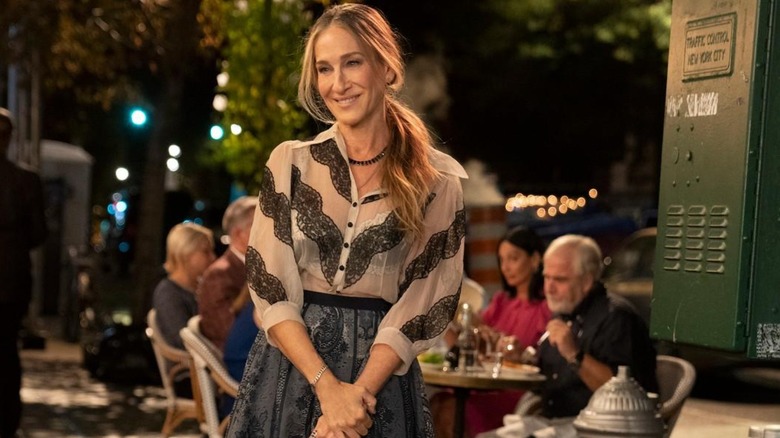 The whirlwind event that was "And Just Like That..." season 1 is coming to an end, and HBO Max is celebrating the finale with a documentary about the "Sex and the City" reunion series. A new trailer takes viewers inside some of the casting and costuming of the new season, plus shows plenty of footage of the actresses reuniting.

"And Just Like That...The Documentary" will drop on the streamer on February 3, the same day as the season's final episode. The behind-the-scenes look at the show seems exciting and nostalgic, and possibly like it would've framed the show in a more positive light for viewers if it had come out earlier. The new season has been heavily scrutinized by fans and critics alike, with Miranda's (Cynthia Nixon) plotline and the writing of new character Che (Sara Ramirez) gaining some of the heaviest criticism.

The cast and crew of the series are all smiles in the documentary, though. In one snippet, Nixon sits at a restaurant table with Sarah Jessica Parker and Kristin Davis and says the group is one day away from filming. "Even 23 years in, I'm excited," Parker says, before adding, "terrified and excited." We also get a peek inside the writers room, where the team behind the series comes up with the idea for Charlotte's menopause plot.

In voiceover, someone behind the scenes calls Parker "so tactile," and we're treated to a short montage of her and other cast members trying on potential outfits from the series' massive wardrobe department. The group seems really happy with the shooting experience, whether they're discussing new cast members, Nixon's turn in the director's chair (she directed the episode "Diwali"), or how exciting it feels to simply hear someone yell "action."

This documentary is all well and good, but its most important part seems to be emblazoned on the official poster–and snuck into the trailer's YouTube description. "This season may be ending, but we're not done yet," the YouTube caption reads, while the poster for the documentary is subtitled "A behind the scenes look at the making of the first season." First season, eh? "And Just Like That..." has often been billed as a limited series, but as it draws closer to its finale, there have been murmurs about a possible season 2. Ahead of a renewal announcement, these descriptions in the official documentary marketing materials are the next best proof that the show will go on.

The "And Just Like That..." finale and making-of documentary will air on HBO Max February 3.

Read this next: 13 Shows Like Manifest You Can Binge Watch Right Now

The post And Just Like That... The Documentary Trailer Gives a Window into the Shaping of the New Series appeared first on /Film.