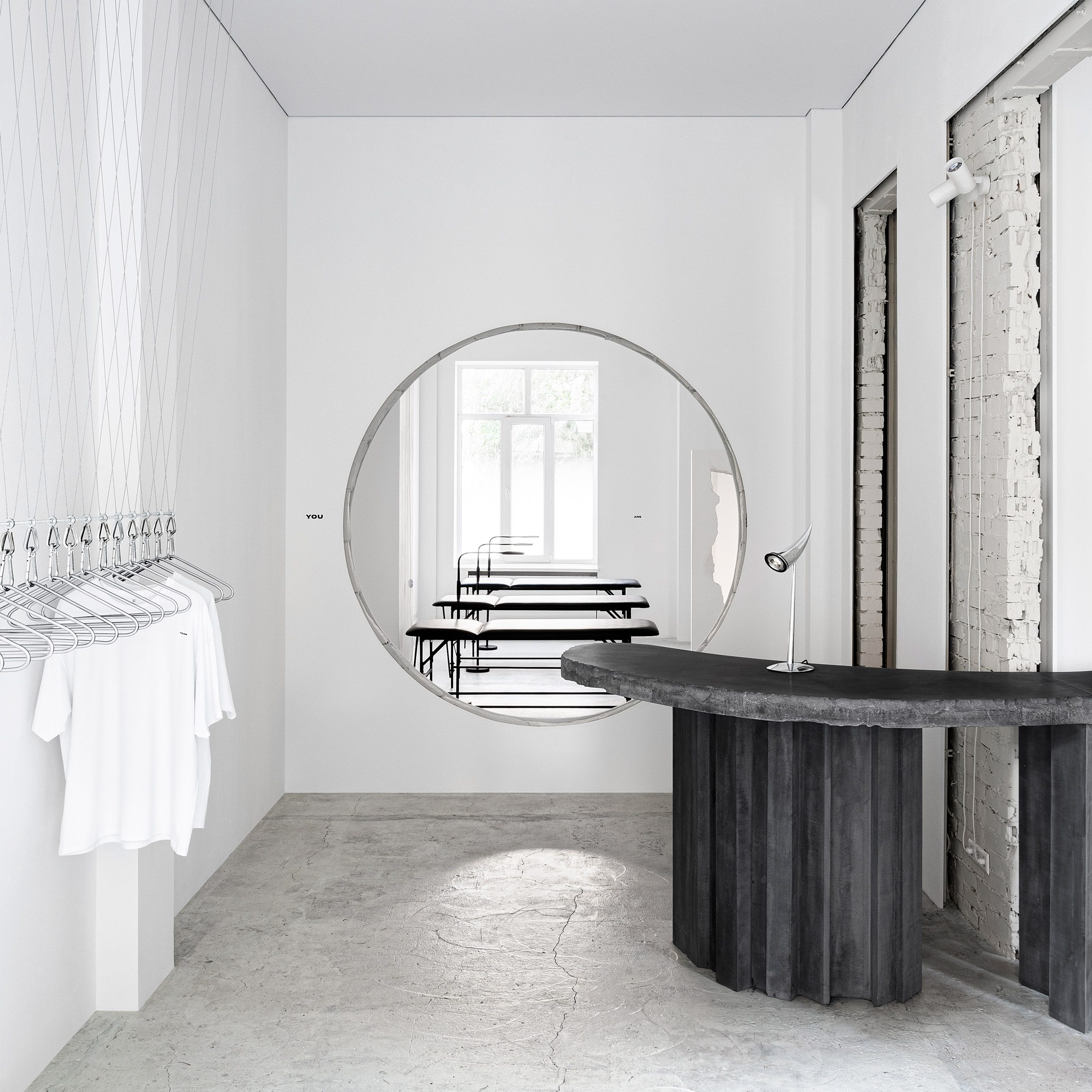 Balbek Bureau has translated the minimalist artistic style of Kyiv tattoo parlour 6:19 Studio into a sparse and desaturated interior.

Located on the ground floor of a residential building in the city's historic Podil neighbourhood, the 111-square-metre studio belongs to Ukrainian artist Ulyana Nesheva.

"The concept of the studio is that all our artists, despite the diversity of their styles and colours, are united by an exploration of minimalism," she explained.

"Simplicity is the ultimate goal and the highest form of complexity."

Local studio Balbek Bureau translated this idea into an uncluttered, open-plan layout using a monochrome palette of black and white paired with concrete and stainless steel.

"The goal was to design a tattoo parlour that resembles a contemporary art workshop," the practice said.

There are almost no doors in 6:19 Studio. Instead, round and rectangular openings are cut into the walls to blend the parlour's separate spaces.

These openings help to improve sightlines and air circulation, while revealing the construction of some of the walls.

"During construction work, we opened up the walls to see what they are made of and found that all the interior partitions are made of brick and foam, and the top is lined with plasterboard," Balbek Bureau said.

"We liked the idea of showing this multi-layered wall and it was implemented spontaneously during construction."

The studio's lobby is home to a waiting area alongside a row of clothes hangers, suspended from the ceiling using metal cables, that display the parlour's own line of branded clothing.

An 800-pound graphite-coloured concrete table snakes through the reception and into a lounge area, serving as both a front desk and a work surface for the studio's resident artists.

"Its edge has been beaten down by hand, giving it a unique and enchanting power as a tattoo on the human body," Balbek Bureau explained.

A large circular opening behind the reception provides a view of the main studio hall, where rows of simple black leather tattoo beds are arranged along both sides.

Connected to the studio space through a series of tall rectangular openings, the lounge area is used by the studio's seven resident artists to rest.

As well as the graphite table that extends into the room from the lobby, furnishings include vintage S34 cantilever chairs by Bauhaus architect Mart Stam set around a metal table, as well as a series of matching lockers for the artists to store their belongings.

A black cube structure placed between two walls in the studio houses a hidden wardrobe, a bathroom and a dressing room for artists and customers.

6:19 Studio is nominated for leisure and wellness interior of the year at the 2021 Dezeen Awards alongside a refurbished Japanese bathhouse and an "otherworldly" skin clinic.

Other spaces in the Ukrainian capital completed by Balbek Bureau include a salon-cum-cocktail bar with concrete surfaces and gold accents and a restaurant that incorporates traditional Ukrainian forms, materials and colours.

Photography is by Yevhenii Avramenko.