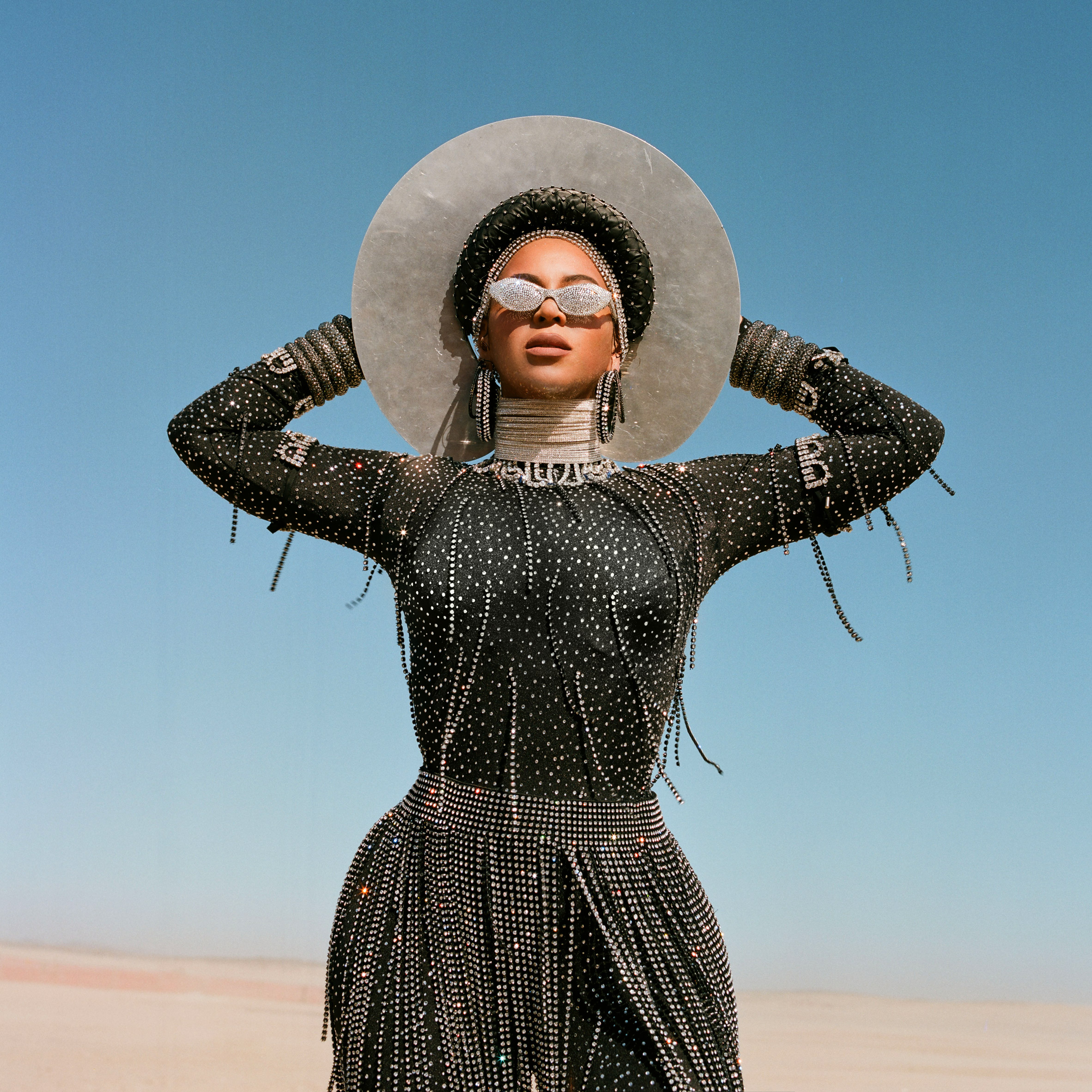 Putting a futuristic spin on traditional, tribal references was one of stylist Zerina Akers' approaches when creating the looks for Beyoncé's visual album Black is King, which celebrates black ancestry and the African diaspora.

The visual album started as small, one-minute visuals in July 2019, but soon escalated to an 85-minute-long film that brings to life each of the songs on Beyoncé's 2019 album The Lion King: The Gift through powerful musical performances and dynamic costumes.

Each outfit was put together by Beyoncé's stylist, Akers, who has been working with the artist for the last six years.

With over 70 different looks, the process became "like a travelling circus," the stylist said, with Akers receiving a constant stream of merchandise from a mixture of established brands and emerging designers.

As the stylist told Dezeen, she and her team wanted the fashion to speak to people of all colours, while specifically empowering the film's black audience.

"I wanted to have this global conversation with the wardrobe," said Akers. "I hope that people of all colours recognise and respect the power and beauty of brown skin overall, and that also applies cross-culturally."

"For the black people [watching], I hope that they start to research their spiritual heritage and what truly belongs to them," she continued.

"I hope that they are left with this sense of entitlement, that the world does belong to them and that they belong in the world."

According to Akers, confronting certain stereotypes often imposed on black people and people of African descent was central to the film's costume design.

This included the use of animal prints, which was prevalent across the whole film.

"I wanted to take that stereotypical notion that if you want to present a tribal element, then it automatically goes into animal prints," said the stylist. "I wanted to turn that on its head and raise it up to make it feel really high fashion."

Akers dressed Beyoncé in a custom faux-cowhide corset top and matching mini skirt by Burberry in the song Already, which served as a nod to the South African Zulu culture and their use of shields made from cowhide.

"It was unlike anything that I've ever seen before in fashion," she said. "The mixture [of animal prints] lent itself to a very artistic image."

Beyoncé's entourage of women was also created as a powerful nod to "one of the most feared military groups known to man", the Dahomey Amazons.

This all-female military regiment was part of the Kingdom of Dahomey, a West African empire that existed from the early 17th century to the late 1800s, known today as the Republic of Benin.

The costume designer also used a singular animal print in a bold fashion in the video for Mood 4 Eva.

Here, Beyoncé sits atop a leopard-print Rolls Royce wearing a custom Valentino leopard-print, sequined catsuit – which was hand-sewn by 10 people over the course of 300 hours – surrounded by men in leopard-print suits.

"Many of these looks speak to this kind of 'ghetto fabulosity'," said Akers. "This ghetto-fabulous lifestyle that's portrayed with these fancy cars and flossy things."

"The looks in Mood 4 Eva, for instance, take this notion that many people have looking at rappers – how they spend money and how flashy and flossy they are – but this really goes back to a more tribal, more regal, idea of being adorned, wearing gold and wearing jewellery."

"You see this combed and weaved throughout [the film], where we play in this world with things like money-print pyjamas – just really putting it in your face."

As Akers explained, these costumes were not only designed as a more literal portrayal of wealth and decadence, but also speak to a cultural richness.

This can be seen in various outfit details, such as a gold chain hood by Akers and Natalia Fedner and Lafalaise Dion's headdresses made from cowrie shells, which are featured throughout the film. Cowrie shells were once traded as currency in West Africa and stood as a symbol of power.

Beyoncé wears Akers' and Fedner's gold headpiece in the video for the song Already as she swings on designer Lee Broom's Hanging Hoop Chair. Made to feel like "chain-metal hair", the hood was crocheted from delicate gold chains, before the designers interwove it with gold hoop earrings of all shapes and sizes.

"I wanted to have this conversation about the idea of gold as it relates to the African diaspora," the stylist told Dezeen. "For many of us black women, it's our first piece of jewellery, and our first look into opulence."

"Our mothers would wear gold earrings, and this travelled through time, so in the 1980s you had these bamboo-style gold earrings, and so on. So it really was a nod to that and to all of those women in our families, past and present."

Some of the looks spoke to more spiritual aspects of African culture, such as those featured in the chess scene of the Mood 4 Eva video.

The video features a garden lawn spray-painted with white chequered tiles, which is navigated by Beyoncé and the cast who are dressed in black and white garments to represent chess pieces.

"I wanted it to feel like this spiritual and religious experience, where the bishop feels like more of an indigenous priest," said Akers.

"Often, again, with stereotypes, black becomes this negative thing – there are negative connotations with black cats and darkness, as it pertains to light, and that, unfortunately, has translated to black skin as well."

"I wanted to show this notion of black versus white, but I wanted black to play in the more positive charge," she added.

However, according to Akers, the true energy of the wardrobe for Black is King is encapsulated in a series of sparkling looks featured towards the beginning of the film, in the song Find Your Way Back.

Beyoncé and her fellow dancers are dressed in glistening, fringed capes by AREA and Lace by Tanaya, and catsuits studded with crystals by D.Bleu.Dazzled.

These looks are accessorised with bedazzled sunglasses by A-Morir and stacked crystal bangles and chokers by Laurel DeWitt that were welded together to emulate the neck-stretching rings used by the Ndebele tribes in South Africa.

"You get tribal references in a futuristic way here, and you get a little bit of runway and a little bit of independent designers – all this really speaks to the spirit of the wardrobe in the film overall," said Akers.

"It wasn't just one designer; it took the effort of pulling all these smaller pieces and elements together, and styling them into one bigger picture."

For Akers and her team, it was imperative that Black is King amplified the voices and work of lesser-known black designers, as well as honouring some of the bigger names that Beyoncé has consistently worked with over the years like Chanel, Alon Livne and her head tailor of 20 years, Timothy White.

"We wanted to have a global conversation, but then we also wanted to highlight independent designers, to offer this opportunity to lesser-known black designers as well," said the stylist.

"So as these Burberry and Valentino looks circulate across Vogue and Harper's Bazaar, and all these fashions magazines, so does the work of these smaller designers."

The same goal also saw Akers launch her own platform earlier this year in June, called Black Owned Everything, to promote the work of black-owned businesses.

As Akers explained, the film took on a whole new meaning following the murder of George Floyd and Breonna Taylor and the Black Lives Matter protests that broke out globally as a result.

"Watching the film after all the uprisings and the racial injustices, every single word had such a different meaning, and it landed so powerfully," she said.

"One thing that I really appreciated was that not only Beyoncé wore these grand and ornate looks, but you see it throughout as an even playing field," Akers continued. "Often the dancers are wearing the same thing, and the people in the deep background."

"It speaks to a certain level of entitlement – that we are, and should be, entitled to this regal and royal experience."

Black is King was released on 31 July 2020, and can be streamed online on Disney Plus.