Today was a pretty good day for backyard birds. The first one I noticed was this Goldfinch perched on top of the crook and looking yellower than the rest. There've been a lot more finches around lately and they're gradually turning yellow getting ready for mating season. 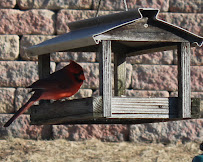 Then the Cardinals showed up. First the male asserted his dominance by shooing away all comers while he pecked at the safflower seed in the platform feeder. After he left the female arrived and she graciously allowed any and all other birds to join her in the feeder. Him I got a picture of, she didn't stay long enough.

One of the Chickadees held still long enough on the edge of the birdbath to have its picture taken. They're such active little things that it's rare that I get the chance. 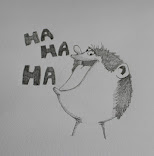 The first figure in the H lesson in the 3-D drawing book was called Ha! Ha! Ha! I thought it would be harder to draw than it was and even the letters turned out okay.

After that I turned back to the stack of cubes that I drew yesterday and added "extras." I put in doors and windows and Peepers doing things. I even added a Peeper cat, a Peeper bird, and a row of Peeper ants.

The gratitude journal page today has only four items so I drew the pictures extra big. I'm getting better at making bigger pictures. I've been practicing.

At Friday Night Knitting tonight I got through the first half of the Barn Owl Sock heel. Look how the yarn color pooled on the heel. CP said it looks like a toasted marshmallow; I think she's right. Next comes the other half and for that one I need to concentrate so I won't be chatting or even watching TV while I knit that part.

Today's toss was a gold and orange pashmina that I bought when I had more colors in my wardrobe. Now that it consists of blue jeans and red, black, and white t-shirts and sweaters, the orange doesn't fit in. Begone!

Man, it got windy this afternoon. Cold too. I was glad that I didn't have plans to go out except to pick up my Amazon package. The other day I decided to take off the childproof locks on the cupboard doors and went downstairs to get the electric screwdriver to use, only to discover that two of my three batteries no longer held a charge. So I ordered a couple replacements. I don't use the tools often but I like them to work when I need them.