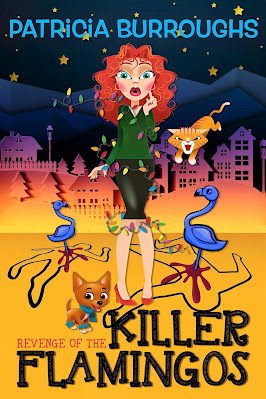 According to award-winning screenwriter and bestselling novelist Patricia "Pooks" Burroughs, she’s spent more than five decades researching MJ’s Dys-Daze Mysteries, since she and her heroine both have ADD, dyscalculia, and other associated cognitive disorders, which makes them very disorderly, indeed. In the middle of writing her YA fantasy trilogy, Maisie Jo O’Malley exploded into her life, demanding to be written. So Pooks dropped everything to write her first mystery. She can’t wait to get back to MJ and her shenanigans and has plans for at least a book a year. Learn more about Pooks and her books at her Facebook page, and watch the trailer here. 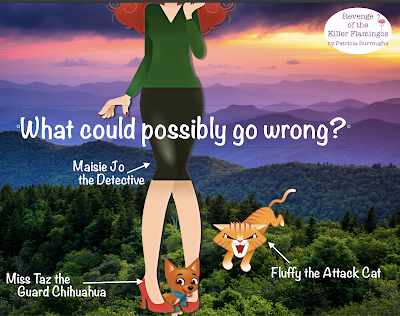 What was your life like before your author started pulling your strings?

Boring! Seriously boring. Well back when I was a child actress, life was tedious but at least it was punctuated with exciting bits. But since I moved home from LA to Pisgah Cove, North Carolina? No exciting bits. Not much SAG work, either. So I’m a temp between acting jobs, which means just about all the time. I told you. Boring. But I turn temp jobs into acting! I search the internet and then whip through my wardrobe to wear the right costume for the role/job I’m going to fill doing a boring job in a boring office, and then I pretend I’m an actress playing the boring part in a boring office, so it’s not as boring. Oh, my sister and I are the eighth generation of crazy women to live in our 200-year-old house. Well, we’re the first ones who aren’t crazy, but that’s not exciting, that’s just—

Pooks: (sigh) You’re skipping all over the place on this list of questions, and now I can’t even find it, even though I just had it, it has to be somewhere on my desk.

MJ: Your desk that has alluvial layers of papers dating back to before the turn of the century?

Pooks: Oh hush. Found it. What trait do you like most about yourself?

Pooks: I love when that happens!  But what trait do you dislike?

Pooks: Okay, I get that your dys-brain has landed you in some embarrassing situations—

MJ: You think I dislike my—? I have a beautiful, sparkly, colorful, chaotic masterpiece of a brain, and I love it. Yes, I have ADHD, dyscalculia, and associated cognitive disorders and “dys” stuff, and I call my lovely brain my dys-brain because I sometimes get all those dys words mixed up. Dys-brain’s an inclusive and affectionate nickname. Don’t look all smug, missy. You had to copy-and-paste the dys-es from your own bio to make sure they were right.

Pooks: [clears throat) How has meeting your author changed your life?

MJ: Well, she murdered this strange professor up at Ashville University—

Pooks: I didn’t murder him! The villain did.

MJ: No difference and don’t interrupt me. I never had murders to investigate before that! Oh, and she sent this kinda hot lawyer my way, and he doesn't agree, but he’s Watson to my Sherlock. I knew as soon as I saw that TV show, Sherlock, that I could solve a murder, too. Have you seen what the inside of his brain looks like?

Pooks: Hold on. His brain is chaotic in a gazillion-brilliant-thoughts-at-one-time way, not a dys-brain way.

MJ: Are you implying I’m not brilliant?

MJ: When I solved the murder? When I caught the murderer single-handedly? Okay, with the help of Miss Taz and Fluffy. Or is that too spoilery?

Pooks: You’re running out of words. Explain Taz and Fluffy.

MJ: Miss Taz is my rescue Chihuahua who wears white gloves all the time and also white shoes. Okay, they’re four white feet, but they make her look so ladylike!

Pooks: Then she’s wearing a costume, too. The fact that you named her after the Tasmanian Devil does speak loads.

M J: And Fluffy is my sister’s feral cat that lives under our stairs, that thinks he owns the staircase, so that I take my life in my hands to get to my rooms. My sister’s taste in cats is about as good as her taste in men.

Pooks: If you could rewrite a part of your story, what would it be?

MJ: It was totally unnecessary for me to end up in the hospital. With Benjamin Rhys Griffiths, Attorney-at-Law, sleeping beside me, taking up half the bed. And Miss Taz under my blanket, camouflaging herself as a lump so the doctor wouldn’t see her and make her leave. On second thought I wouldn’t change anything because the mystery involves jazz and R&B and 70s rock and barbecue wars between North Carolina and Texas, and dead bodies, and is never, ever boring.

Pooks: Which character bugs you the most?

MJ: Benjamin Rhys Griffiths, Attorney-at-Law. Except, well, he hired me to create a flash mob for the victim’s funeral, which made investigating the murder much less problematical. And he’s kinda hot. And he tries to be bossy. That’s kinda cute-hot.  But he puts up with me being bossy back. And he listens to me and even sometimes follows my lead. Although he doesn’t always notice it’s my lead because I’m crafty that way. Oh, and he’s more than kinda hot. Just saying.

Pooks: Last one. Do you argue with your author?

MJ: No. She argues with me.  Now it’s my turn to ask you questions. First, who died and made you the boss of me? Next, if you cleaned off that desk, would my next murder come before next year? And—

Pooks: Goodness me, we’re over the word count. Interview over.

Revenge of the Killer Flamingos

Meet MJ O’Malley. She’s impulsive, easily distractible, and even more easily bored. But when a hot lawyer hires her to create a flash mob and people start dropping dead–by flamingo?–well, murder in Pisgah Cove, North Carolina is the brightest, shiniest object to capture her attention ever!

But can she actually solve the crime before she becomes the final victim? Hop aboard for the zany romp and stick around for deadly murder.

With the help of Miss Taz, her Chihuahua guard dog, Fluffy the feral attack cat, a reluctant lawyer as sidekick, and her fierce intellect?

With the help of Miss Taz, Fluffy, Ben, and her fierce intellect, MJ’s got this case covered. Because MJ has finally found her place in life.