Bridgerton: 24 Behind-The-Scenes Secrets From The Set Of The Netflix Show 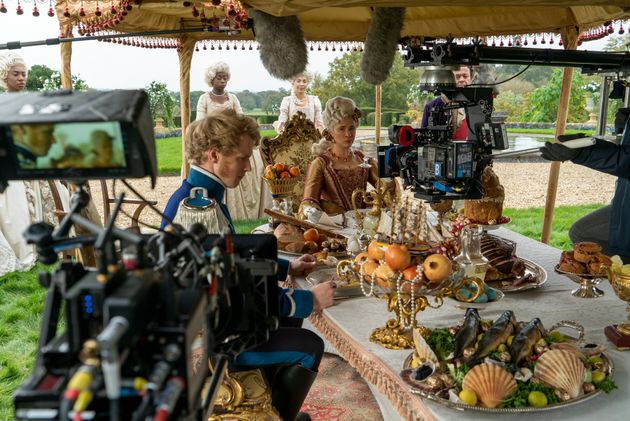 Bridgerton fever is currently sweeping the globe once again, following the arrival of the raunchy Netflix period drama’s second series.

As we all get swept up in the new love triangle between Anthony Bridgerton and the Sharma sisters, we’re turning our attention to what happens behind the cameras, revealing all the behind-the-scenes secrets that you probably won’t have known about the show...

1. In the first series, there were more than 6,000 outfits each tailor-made for the show

All the outfits had to be stored in an industrial-scale warehouse. 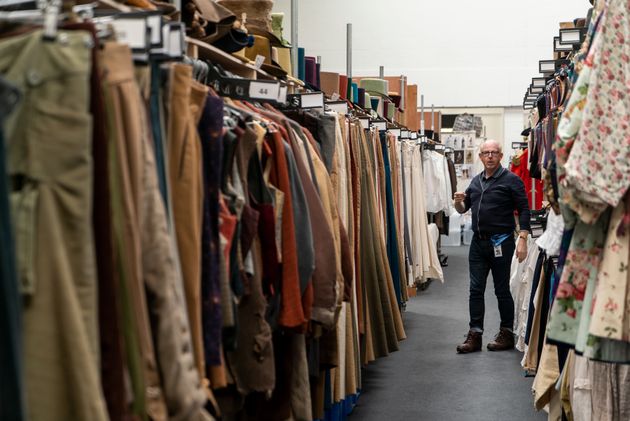 2. A hell of a lot of designers worked tirelessly to create the outfits

There were 238 costumers and seamstresses who worked on the first season.

3. There was a clear brief for the costumes

Costume designer Ellen Mirojnik told HuffPost in 2020: “There is a very clear aesthetic that we always look for, fresh and young and aspirational: would a modern girl wear it today even though we are set in 1830? What can we do to disguise the prim and properness that 18th century Regency was all about and make it something new and young?

“We kept the style and the silhouette of 1813 for the most part, but 1813 is shaken up and turned on its head by using more modern fabrics, modern techniques, taking a little bit of what was authentic and mixing it with many different periods of time to create our own style.” 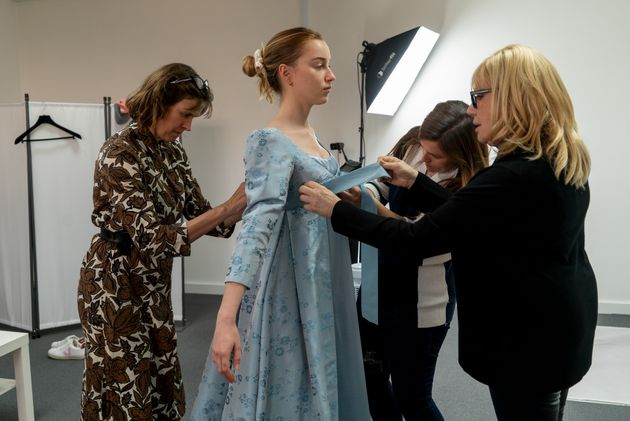 4. People had to help the actors carry their costumes

Nicola Coughlan, who plays Penelope Featherington, explained to HuffPost that the costumes are so heavy, they often have to have someone walk with them to set because they were too heavy to carry by themselves.

5. The wigs also cause some issues too

Golda Rosheuvel, who plays Queen Charlotte, sports some incredible and elaborate hairpieces on the show, but they often caused some logistical problems when trying to get to set.

In a post on her Instagram, Golda revealed that she sometimes required “alternative transportation” for her when she would be wearing a particularly tall wig, showing her having to get to set in a tall mini-bus.

6. There’s a huge number of locations used to film the series

Scenes are shot across the UK in Bath, Yorkshire, London and Hertfordshire among other cities, to anchor the show with realistic Regency era settings.

Radio Times recently complied a full list of what real-life locations were used in series two, which you can find here. 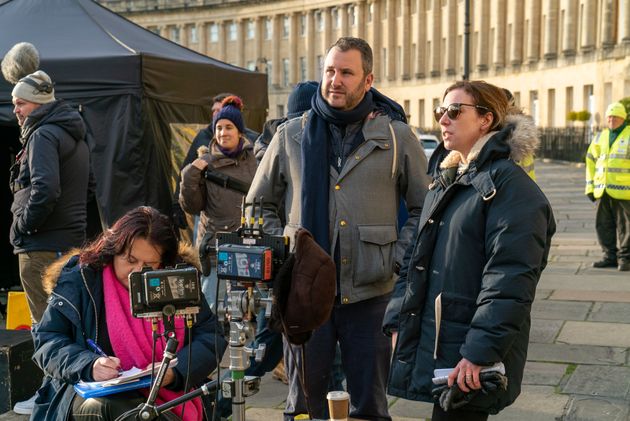 7. The show employs someone specifically to ensure things don’t get broken on location

Due to the historical importance of many locations Bridgerton films at, the show employs people to ensure things don’t get broken or damaged during filming, director Julie Anne Robinson told Deadline.

8. However, a lot of the show is also filmed in a studio

Around half of it, in fact.

Elaborate sets are constructed in a purpose-built studio in Uxbridge, on the outskirts of London.

9. There were nearly 100 different sets to build in the first series

Each of those also had to be designed differently.

“These rooms are like nothing I’ve ever seen built on a stage before,” set designer Will Hughes-Jones told HuffPost. 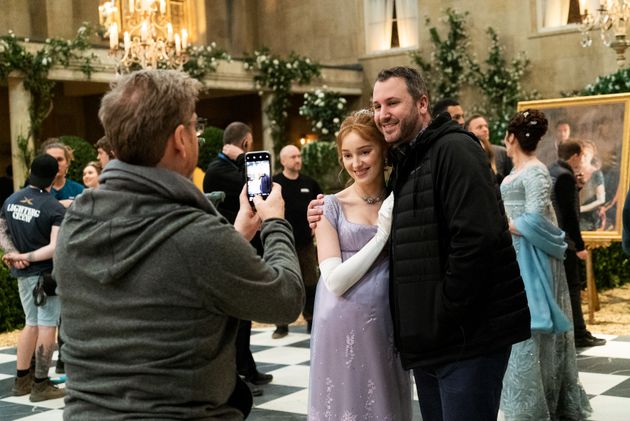 10. All the carpets were made specially, due to their size

“Even if we could hire them or buy them we wouldn’t have been able to find them, so that was a new thing for me,” Will said.

11. There can be 500 people on set for the ballroom scenes

The balls have become one of Bridgerton’s trademarks, and each of the scenes can also take up to five days to shoot, according to Radio Times. 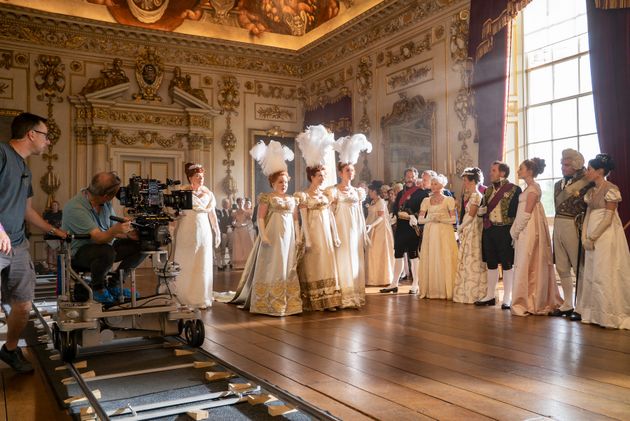 12. There is an on-set historian

While Bridgerton combines elements of historical accuracy with an imagined world, the show still makes use of a historian on set, who regularly inputs into what is being filmed. 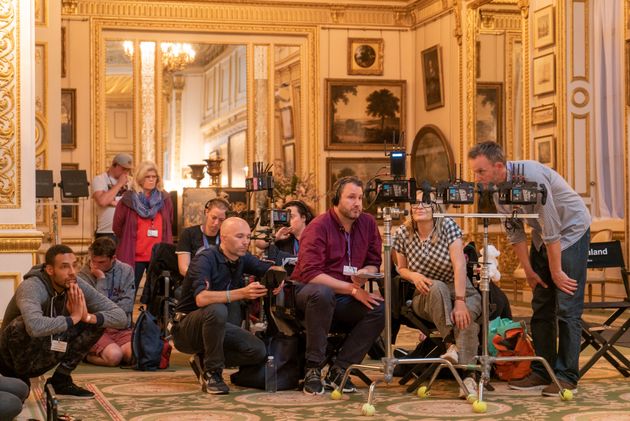 13. The show had a colour-conscious approach to casting

In a piece for The Hollywood Reporter, creator Chris Van Dusen said: “My pitch for Bridgerton was straightforward: I wanted to turn the period genre on its head and reimagine it in a new and exciting way. One that included characters of different colours and backgrounds. One that explored the topic of race. I wanted gay people to exist in this world. I wanted to expand this entire universe.

“So I created a multihued, multi-ethnic Regency period world just as diverse as the one in which we live today. My show would be about love. Joy. Triumph. It would be a show that says everyone is worthy and deserving of all of those things, and more.” 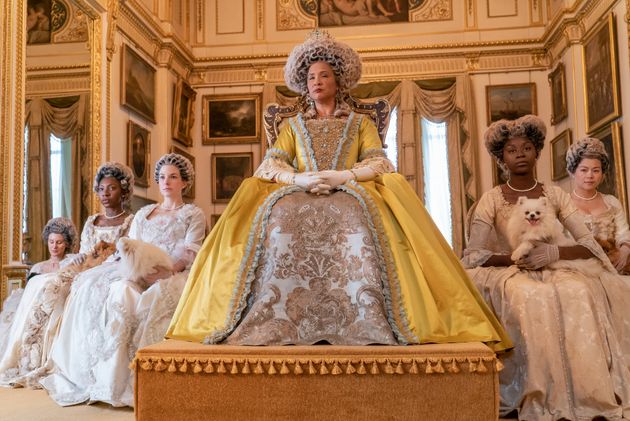 14. The horse and carriage scenes are mostly shot without any horses

In behind-the-scenes video A Close Encounter With The Cast Of Bridgerton, Regé-Jean Page revealed that carriage scenes are often filmed in the studio with members of the crew moving the carriages forward.

These shots would then be cut together with shots of horses pulling carriages down a street that actually had no-one in them.

15. Each actor has a ‘nudity contract’

With Bridgerton being synonymous with raunchy sex scenes, the actors have to outline how much they are happy revealing on camera in a so-called “nudity contract” prior to shooting to ensure the show can make everyone comfortable.

As has become pretty standard in TV and film production in recent years, Bridgerton makes use of an intimacy co-ordinator to choreograph the intimate scenes like a dance, and work with the actors to ensure everyone’s boundaries are respected.

17. Phoebe Dynevor and Regé-Jean Page had a signalling system while they were filming intimate scenes

Intimacy co-ordinator Lizzy Talbot told Buzzfeed that she developed a system of hand signals between her and the season one leads so they would be able to let her know how they were feeling during filming. 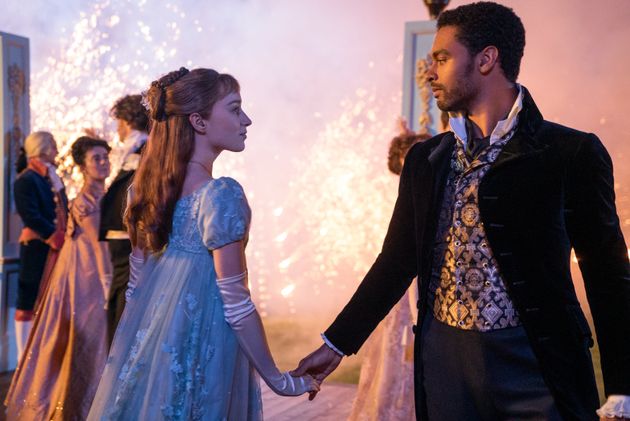 18. The first scene they ever shot together was a sex scene

Fans will likely remember the hot and heavy “library scene” between Daphne and Simon. Despite the fact it fell later on in the first series, it was actually the first one actors Phoebe Dynevor and Regé-Jean Page filmed together, according to the Netflix video A Close Encounter With The Cast Of Bridgerton.

19. They used an unexpected prop to make the sex scenes more convincing in series two

Jonathan Bailey, who plays Anthony Bridgerton,  said it was “amazing” to see how the whole industry intimacy co-ordination industry had “just come on, even in a year” when shooting season two.

He told Radio Times: “There are new tricks to the trade – little cushions – and it’s amazing what you can do with a half-inflated netball.”

Explaining how the unusual item helps in those intimate moments, he continued: “Well, if there are two people doing a sex scene, the rule is they must have three barriers separating them and there are certain acts where a half-inflated netball can allow for movement without having to connect physically.”

20. The actors are offered a personal trainer to help them prior to filming sex scenes

“Luke Thompson got mixed up with the other Luke – Newton – on the show,” Nicola explained (via The Sun). “They offered him a personal trainer for his intimate scenes, and we don’t get all the scripts at once, so he was like, ‘I wonder what that’s going to be?’”

In actuality, Luke T didn’t have any intimate scenes, but he was allowed to keep the personal trainer.

21. The Bridgerton and Featherington families are inspired by two famous American families

Production designer Will Hughes-Jones told Glamour: “I say it’s the Kennedys versus the Kardashians.

“The Featheringtons are new money, so there is a more brash, flashy element to them. Whereas the Bridgertons are a bit more old money and therefore have the historic and polite qualities you’d find in a design piece.” 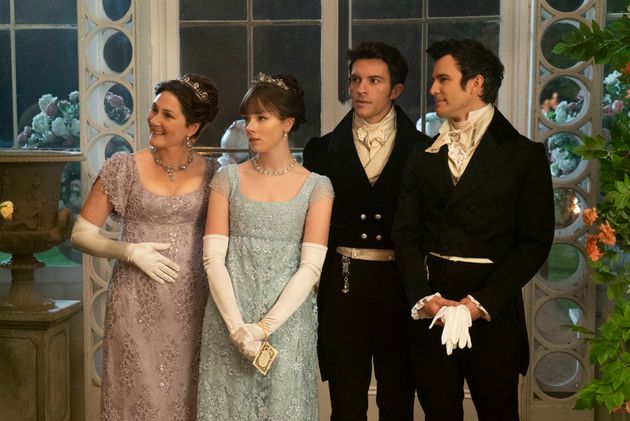 22. The season one twist almost worked out very differently

Nicola Coughlan revealed that her character’s epic twist, which saw Penelope Featherington unveiled as the gossip columnist Lady Whistledown, was almost kept under wraps for longer.

“They had changed back and forward a few times,” she said during Netflix’s Tudum event.

Nicola went on to say that bosses initially wanted to end the series with a “red herring”, pointing towards Cressida Cowper as Lady Whistledown’s true identity rather than Penelope, before settling on the eventual ending. 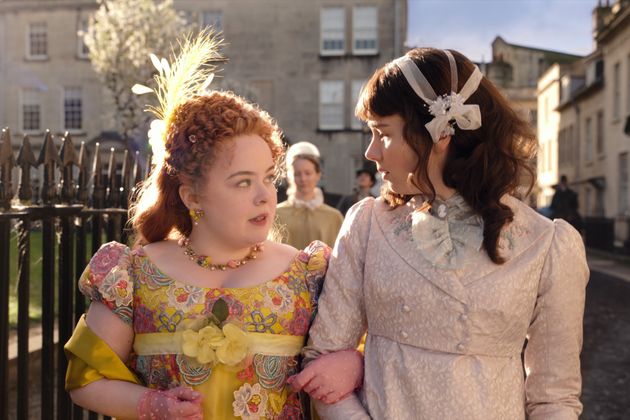 23. Landing the part is only the start of becoming a series lead

Simone Ashley, who plays newcomer Kate Sharma in season two, told Radio Times that while the audition process was not a particularly long one, she had a lot of prep to do before shooting her first scenes.

“I self-taped, met [Jonathan Bailey] and then I got the part. Before I knew it I was in wig fittings and at horse-riding training,” she explained. “I’d only ridden once before with some friends in Wales. I did a bootcamp to learn to ride for this.” 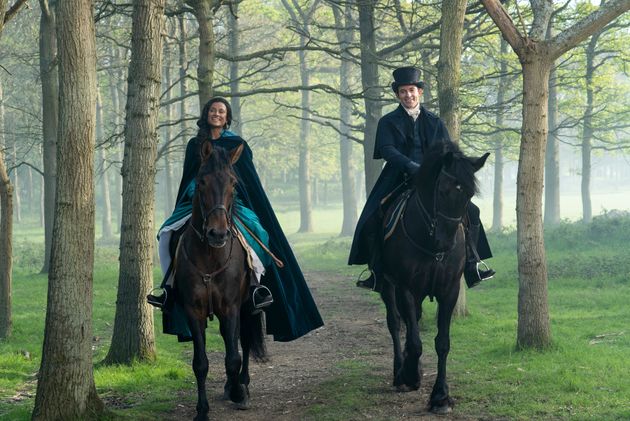 24. Jonathan Bailey has made a book of tips to hand down to the next series lead

After receiving a lot of advice from Phoebe Dynevor about taking on a series lead role, Jonathan told Radio Times he has written a notebook of similar tips to pass on to whichever member of the Bridgerton clan takes over from him.

“It’s a Bridgerton guide for the next sibling who plays the lead,” he said.

Bridgerton seasons one and two are available to stream on Netflix now.