heartbreak and joy... Learning To Twirl (The Twirler Quartet, #3) by Claudia J. Severin

Two devout teenagers faced love amid tragedy circa 1969. An Army enlistment during the Vietnam Conflict promised career opportunities but tore their dreams apart. 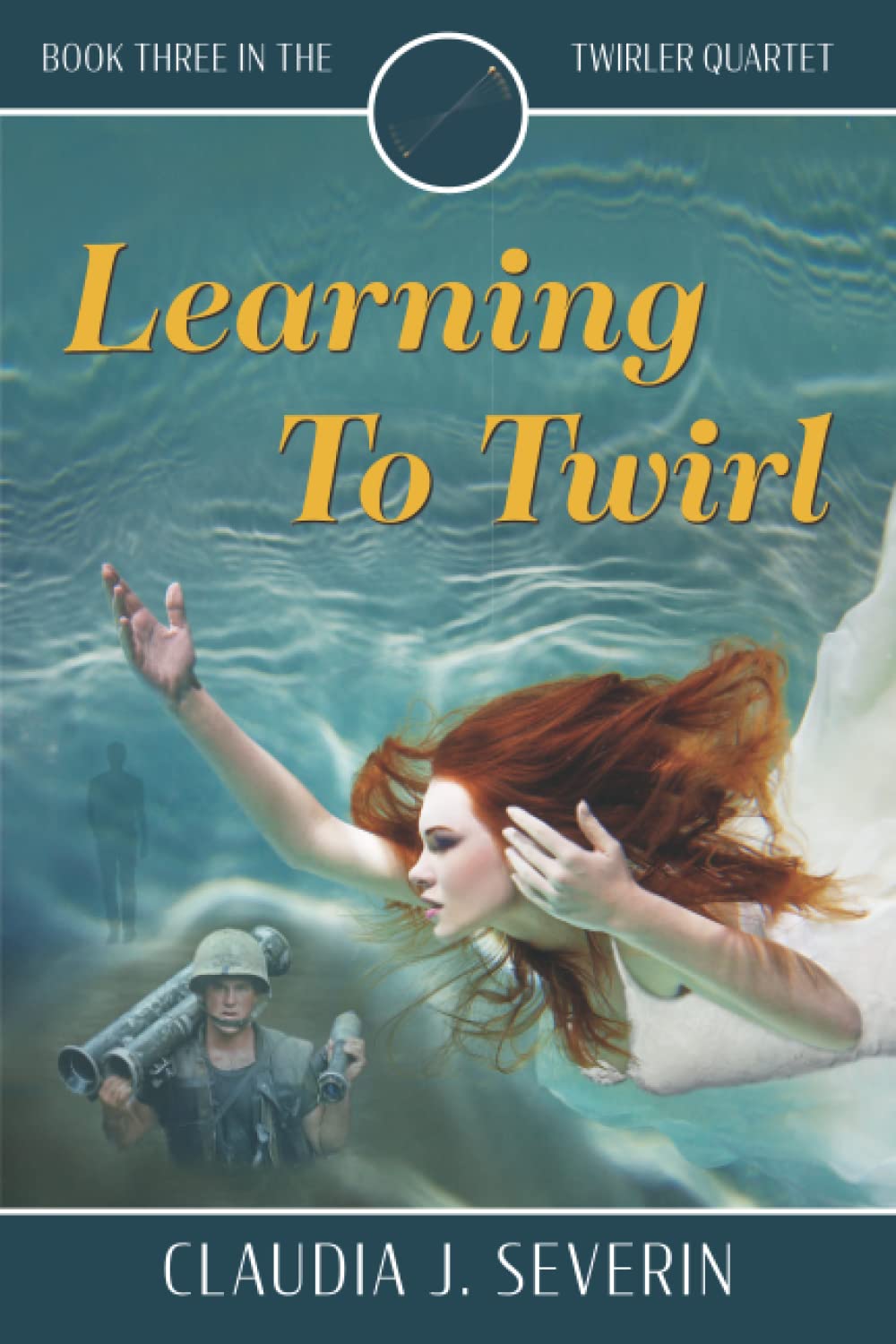 Description:
Published: October 2021
Two devout teenagers faced love amid tragedy circa 1969. An Army enlistment during the Vietnam Conflict promised career opportunities but tore their dreams apart.
As a Roman Catholic, Nancy knew better than to succumb to temptation. She was following the example of her two older sisters: one a nun, and the other a wife who’d had three children in quick succession. But when a sweet-talking devilishly-handsome boy began charming her, it wasn’t just her baton that was twirling. It was her heart.
Peter knew he shouldn’t resent his older brother, the golden boy. Terry excelled in sports, academics, and winning friends leaving Peter stuck at home milking cows. Their parents expected Peter to hold down the farm when Terry’s world was upended by an accident. Once Peter fell for a beautiful red-haired angel, he knew his prayers had been answered.
Later, while Peter performed his patriotic duty in Vietnam, he discovered his brother was ambushing him on the home front, about to steal his cherished wife and daughter. Did his devotion to the Army’s cause create an unbridgeable rift in his marriage?
Return to the mythical Capital High School in Lincoln, Nebraska, for the third in the Twirler Quartet series that delivers more heartbreak and joy at a time when naïve teenage boys were being drafted, surprised college students were being attacked at protest marches, and the president promised peace and love to the youth of America.

“I’m not sure you should be there when I talk to my parents,” Nancy told Peter when they got into his car after school. She’d already put off telling them until after the Thanksgiving weekend. She knew she’d have to start dressing a little differently soon, and her mother was likely to notice her changing shape or wardrobe choices.

“That doesn’t seem fair to you. They’re going to be upset. I should be there to accept my share of the blame.”

“That’s the thing. I think my dad will be angrier if you’re there. If it’s just me, I might be able to keep things from getting too crazy. Then by the time you see them, it might be easier.”

“I guess it’s your choice. When are you going to do this?” Peter turned the key in the ignition.

“I hope tonight. I need to get it over with.”

“Will you call me afterward?”

They were clearing the dishes from the table when Nancy asked to speak to her parents. They all sat at the dining table again.

“You know I’ve been seeing Peter again,” she began.

“I thought he’d gotten too big for his britches after he punched that other kid in the nose. He hasn’t ever hurt you, has he?” her father asked.

Jeanette rubbed her eyebrow. “No, Honey. You can’t have a baby. You’re seventeen.”

“Who told you that?” Jeanette was shaking her head.

Nancy met her mother’s eyes. She hadn’t expected her to be in denial. “Well, Doctor Laidley told me. But I’ve had all the symptoms.” She got up her nerve to look at her father’s face. It was beet red.

“How is this possible, Nancy? You were raised to be a good girl.” His eyes seemed to bore into hers.

She swallowed and looked down. “I don’t know. We got caught up. I remember trying to comfort him when his friend was dying, and one thing led to another. I’m sorry to disappoint you.” She tried to keep her emotions steady and took a calming breath.

“I know that. I want to try to finish high school.”

“What kind of boy is this who takes advantage of a young girl?” Darrell’s lip curled.

“This isn’t his fault any more than it is mine. He didn’t force me. We both—it was a mutual decision. Now we’re planning to get married before the baby is born.”

Her father’s laugh was hollow. “You ain’t getting married. Not for years to come. No, there are ways to deal with girls who get in trouble. That’s the only option you have now, Missy.”

“We’ll call Father Anthony. He’s had to deal with this before.” Jeanette folded the table cloth and gathered it up. “You remember the Childress girl, Darrell? I forget her name. I’m sure he’ll know a good place.”

“You don’t need to tell Father Anthony. I can go to confession on my own.”

“You’re doin’ whatever we decide. That’s what parents are for. You’re in trouble and we have to try to rescue you. Hush your mouth,” Darrell said.

Nancy knew when her father said that the discussion was over. Well, she’d told them. Maybe the next talk would go better. She wanted to call Peter, but she didn’t want her parents to hear their conversation.

The next morning, he was waiting for her outside the band room door. They walked down the hall about ten feet so they wouldn’t be overheard.

“Yes. They seemed to think they were going to handle it. I know what they’re thinking but I’m not leaving town.”

“Not yet. Let’s give them a chance to adjust.”

Around 1:30 p.m. Nancy got a note to go to the principal’s office. That made her heart race and her head start to ache. She expected her mother, but Father Anthony was there instead.

“Gather your things from your locker, Nancy. We’re going to your house. You’ll have time to pack a suitcase, then we’re headed to Kansas City. I’ve already contacted Sister Angeline there and she has a spot for you.”

Nancy went to her locker and got her coat, homework, and oboe. It was wrong to put Father Anthony in the middle of this. She’d simply tell her parents she wasn’t going.

When they got to her house, her mother wasn’t home. Her father was still at work, but she’d assumed her mother would be available.

“Look, Father. I know you mean well, but I’m not going to a home for unwed mothers. My boyfriend wants to marry me.”

“Nancy, you’re only seventeen. Your parents know what’s best for you. You have to think about the life of the child first and foremost. The home will find wonderful parents who can care and provide for a child.”

“No. Respectfully, Father. I won’t do that.”

“I won’t force you to go with me. This is what Darrell and Jeanette asked me to do for you. Your parents love you very much. Perhaps they should have given you more time to think about the consequences.”

When Nancy folded her arms defiantly, the priest left her home alone. She called Peter right away, and his mother answered.

“Mrs. Thompson, this is Nancy. I need to talk to Peter.” Nancy looked at the kitchen clock. Classes would be over in about half an hour.

“Please ask him to call me right away.”

She paced the living room. Could her parents force her to go to this home for unwed mothers? Maybe she’d have to go stay with Penny. No, she wanted to continue to go to school at Capital High and get her high school diploma. That was the plan.

Before Peter called her, Jeanette arrived home from the grocery store. “Where’s Father Anthony?” she asked when she found Nancy there.

“He left. I’m not going to a home for unwed mothers. I told him that.”

“You don’t have a choice. Your father and I decided on this solution to your problem.” Jeanette started putting groceries into the cupboard and refrigerator.

Nancy fled to her room, slamming the door like an angry child. That’s what they were doing, treating her like she was a child. She could hear her mother on the phone. It sounded like she’d called her father. Things were going to get worse; she could tell.

The phone rang forty minutes later. She went to the kitchen as her mother answered it. “It’s that boy, Peter. For you. Tell him goodbye.” Jeanette laid the phone receiver on the counter and walked back into the living room.

By the time she picked up the receiver, her voice was quavering. Her fearless façade was cracking. “Peter? They sent our priest to school to take me to Kansas City to a home for unwed pregnant girls.”

“I don’t know what’s going to happen. That’s why I had to talk to you. I told my mom I wasn’t going.”

Just then, Darrell walked in through the carport door and caught her on the phone.

“Who are you talking to?” he demanded.

Darrell snatched the phone receiver from her hand and spoke into it. “Ain’t you got the good sense God gave a rock? Leave Nancy alone. We’re cleaning up your mess.” He slammed down the phone.

“As for you, you’re barking up the wrong tree. You ain’t in charge in this family,” Darrell bellowed. “You are our dependent child. We still decide what you get to do. You hang around with fornicators, you pay the price. And the price is you go to Kansas City with Father Anthony, and you stay in that home with the nuns until this baby is born. They will take care of finding suitable parents. Father Anthony knows all about their work. Once that is over, you can return home and we’ll determine how you can finish high school. Do you understand?”

“I’m NOT going!” Her voice was ripped with emotion. She saw the look in his eye and was afraid he’d hit her. He gripped the counter instead.

“If you don’t do this, you need to leave. We won’t allow you to stay in this house any longer. You will have to support yourself and find somewhere else to live.”

Jeanette appeared in the kitchen doorway; her eyes wide. “Darrell?”

He put his hand up to silence his wife. “Are you going to go with Father Anthony tomorrow?”

She shook her head.

Nancy went back to her room, grabbed her bookbag, oboe case, coat, and purse, and ran out the front door. She had no idea which way to head.

About the author:
Claudia Johnson Severin lives on a farm in Southeast Nebraska. She grew up in Lincoln, Nebraska, in the Eastridge neighborhood. She went back to her high school twirler days for this series. Like her main characters, she found hours of practice together developed friendships which led to many adventures outside of school.
She learned to twirl during her sophomore year at Lincoln Southeast High School, but instead of trying out for the majorette squad there, she used that training to become a twirler at the brand-new Lincoln East High School. During the inaugural year at East, everyone was learning and inventing every day.
This is the third of the Twirler Quartet series. Previous books in the series include Catch It Spinning and Twirling Fire. Although the main characters are high school majorettes, the twirling is largely a metaphor for life lessons.
Writing about past decades gives her a chance to rewrite history and gives the characters a chance to benefit from lessons learned in the time since. She loved the 1960s, but wouldn’t trade her smartphone for a teen line or her SUV for her old Volkswagen Beetle.