I Love Audiobooks, But Will My Nephew Love Them Too?

Every time I follow the river back to the valley my Appalachian family calls home, I always bring along books for my nephew, Nick. From the moment he learned how to read, he’s hit the ground running, burning through anything he can reach. He’s now in 6th grade and loving middle grade novels. Naturally, as an avid audiobook lover, I’ve been biding my time, waiting for just the right moment to share some of my favorite books on audio.

When I was around my nephew’s age, I discovered some of my favorite books — Artemis Fowl, The Lion the Witch and the Wardrobe, and anything by Rick Riordan. When I think about these books on audio, I remember this time as when the world seemed to open up before me through the voices coming from my boom box.

Nick and I share our enthusiasm for middle grade novels, always happy to sit for hours playing video games and discussing our favorite books. But this time I thought, how about audiobooks? To give him a little taste of audio, I started with some of his favorite books in print.

Nick is currently reading A Wrinkle in Time by Madeleine L’Engle, which he loves, but he thought the audiobook performed by Hope Davis didn’t work for him. When I asked him what he didn’t like about it, he said he wanted a narrator that sounded more like the kids the book is about. After we listened to Gregor the Overlander by Suzanne Collins, he confirmed that idea, saying that he thought the narrator, Paul Boehmer, sounded too old to voice a main character. While I listened to and loved both of these audiobooks, I began to think about the kinds of performances that kids prefer in audiobooks. After all, kids are the target audience of middle grade books. Shouldn’t these audiobooks focus on kids’ preferences in narrators?

Inspired to find narrators that Nick did like, I started wandering around audiobook catalogs, stopping on more of our favorite books. While Nick really liked Priya Ayyar’s performance in The Night Diary, he thought the narration speed was too slow. I told him he could speed that up in an audiobook app, and he said that he thought that could work. Since he loves history, we tried a couple other historical fiction titles, but he really struggled to pay attention to their slower pace.

By the time we rolled around to The Lightning Thief by Rick Riordan, I had a good handle on what Nick was looking for in his narrators. Like I had suspected, Nick LOVED Jesse Bernstein’s performance. Bernstein has an incredible way of making Percy’s first-person narrator pop, catching Nick’s attention from the first few sentences. Nick said he loved how the narrator expressed himself, like he sounded like a kid.

After listening to him talk about The Lightning Thief, I knew Nick had to try some of the other novels in Riordan’s imprint, Rick Riordan Presents. Sure enough, after the first 60 seconds of Soneela Nankani performing Aru Shah and the End of Time, Nick was hooked. “Don’t stop the book! I need to know what happens.” He said the same thing for Kinsale Hueston’s narration of Race to the Sun by Rebecca Roanhorse and Ozzie Rodriguez’s narration of The Storm Runner by J. C. Cervantes.

Nick loved all of these narrators, and I watched as he was drawn into each story, sitting at the edge of his seat and waiting to know what came next. These narrators captured the voices of the kids they were about, and to Nick, that meant they were perfect.

I love middle grade audiobooks to the moon and back, but I will never be the audience these titles were meant to reach. Middle grade audiobooks ask the narrator to perform these stories in a way that embodies their kid heroes. For Nick, all he wants right now is a kid-focused adventure with a little bit of the fantastic thrown in. And it sounds like these narrators are up for the challenge. 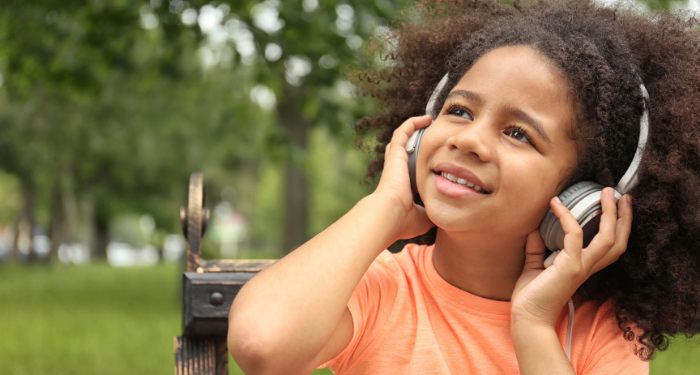