Weddings are supposed to be “that one day” where you’re the king or queen, but, no, someone has to go and ruin it for ya. But what if you’re the one who ruined it for yourself? And you don’t think you’re wrong?

A woman has recently turned to the internet to settle a dispute she had with a friend of hers who, unbeknownst to everyone taking part in her group vacation, was actually hosting a wedding.

And so this unsuspecting woman came with the wrong dress to the wedding. Sure, she was told which one to wear, but it didn’t work out last minute, and then drama ensued.

At this point, you can’t expect a wedding to go flawlessly, especially if you’ve turned it into a surprise for your maid of honor 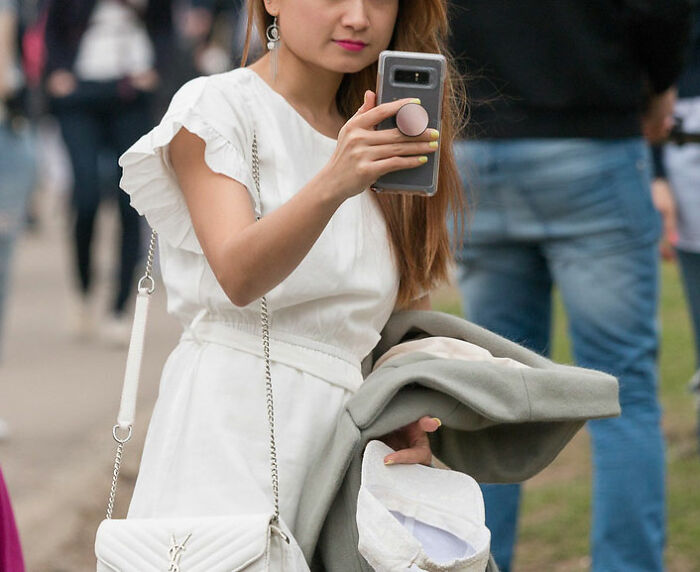 So, Reddit user u/InfamousBake1859 turned to the Am I The A-Hole community to figure out if she was wrong to switch dresses for a special occasion she didn’t know was happening because the dress didn’t fit.

In particular, the 30-year-old and her husband were invited by her best friend to a vacation in South Padre Island, Texas. Oddly enough, the best friend asked her to wear this one particular black dress that OP had for an event. The woman agreed.

A maid of honor was asked to dress in a particular way, but when that didn’t work out, she dressed in white, but then drama ensued 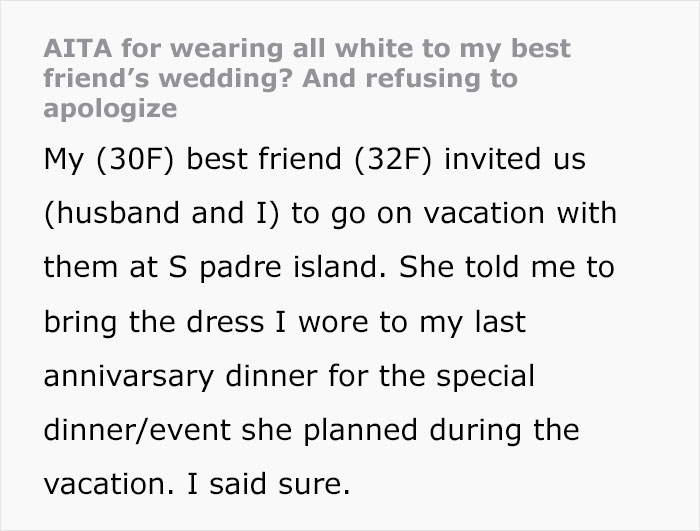 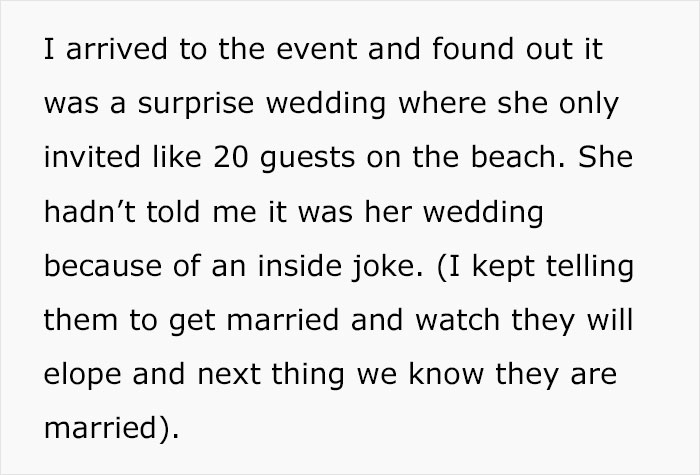 However, when she finally got to packing, she noticed that her elegant black lace dress didn’t really fit her properly, as she had recently given birth, so she went with another, more loose-fitting dress that was white. “I figured it was close enough,” explained OP.

Well, not quite. You see, once she had arrived to the event, she understood that it was actually a surprise wedding party for around 20 guests. She wasn’t told it’d be a wedding because of an inside joke she had with the bestie. What is more, OP was supposed to be the maid of honor as well. 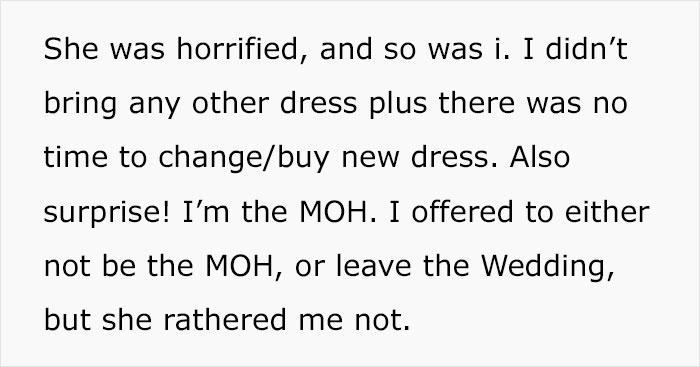 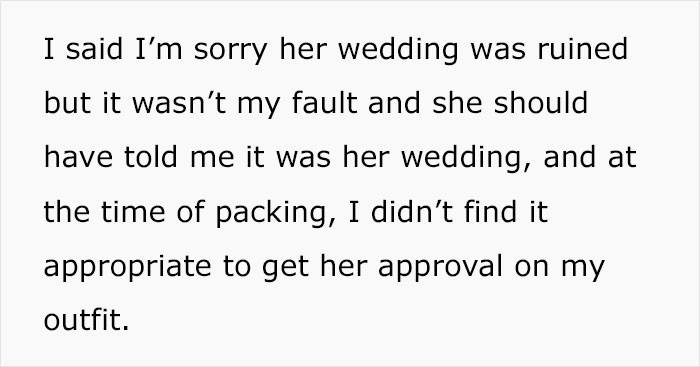 So, there she was, white dress and all, and her friend was none too pleased. She didn’t have any other dress and there was no time to buy a new one, so she offered to not take part in the wedding, or perhaps to just not be the maid of honor, but those turned out to not be options.

Of course, she got blamed for ruining the wedding because of the change in dresses, and despite apologizing, OP didn’t feel like it was her fault to begin with as she was not told it was going to be a wedding, so she had seen no reason to seek approval for her attire.

People in the AITA community found it hard to see any fault in OP. Not only did she not know that it was going to be a wedding party and hence that dressing in white would be off-limits, but also she was on vacation, meaning she had a very limited wardrobe, and, obviously, you can’t assume your body immediately goes back to normal after birth so as to have all your old clothes fit just like that.

But given the circumstances, the AITA community ruled that OP isn’t wrong here 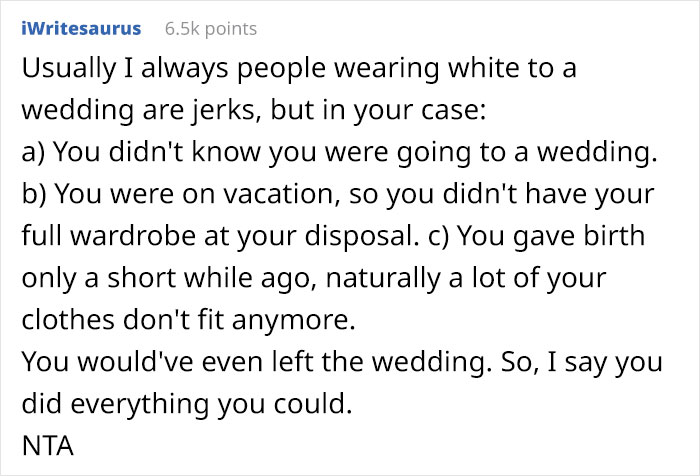 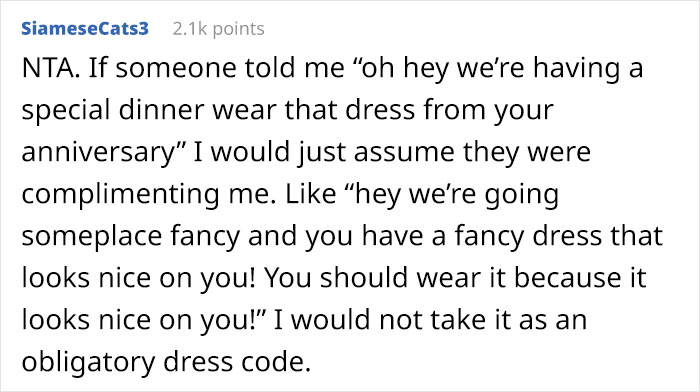 Others elaborated on this, saying that if you are not told the full story of what’s going on, of course there’s going to be a chance of something going awry, so you can’t apply the same standard of dress etiquette. Besides, some don’t even get why you’d ever get upset over someone else wearing white in your wedding, especially when there’s a beautiful beach and friends around you.

All in all, it’s was an NTA (not the a-hole) from the community. The post managed to get a small handful of Reddit awards as well as nearly 12,000 upvotes on the platform. 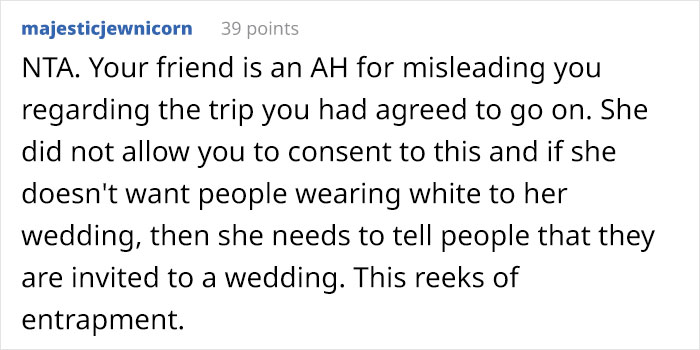 You can check out the AITA post in full here, and take a look at all of the other AITA posts we’ve covered here. But don’t go just yet, as we’d love to hear what you think about this whole wedding situation in the comment section below!

The post Woman Blamed For “Ruining” A Wedding Because She Wore All White To A Surprise Ceremony She Had No Idea About first appeared on Bored Panda.